Explainations after a (very!) long absence.

I know it has been a horrendously long time since I've stopped in here to give an update. Two years really is completely unacceptable, and I felt I should finally come clean about what's been going on and why the serial stopped so unexpectedly (and perhaps even when it may resume).

First, I have been totally remiss to not have mentioned it at the time, but shortly after my last posting here on the blog, Episode One of Rapturous Dawn won Second Place in the Short Fiction Writer's Guild's New Series Contest (September, 2015).

Some of you may already be aware, but Wicked Red is actually a second pen name for me. This serial, and other projects I write under the name Wicked Red, are meant for fun, a diversion away from the longer (and often more serious) fantasy novels I write under my other name, Everyn Kildare.

If you scroll back a few blog posts into the summer of 2015 you'll see that right around the time I was preparing to release the Fifth Episode of Rapturous Dawn: Season One, I was suddenly struck ill. I struggled with mysterious health issues for the next year, and when I did work on my writing, I felt compelled to work on the novels that readers of my other pen name were asking for, and had been asking for for some time. I left my side-projects and the things I wrote purely for fun (poetry, short stories, and pretty much all of W.R.'s work) on the side for when I could find more time to dabble and play with them again.

Somehow, two years passed. My health issues, though not fully resolved, are now diagnosed and much more manageable. I'm getting ready to release the fourth book in the urban fantasy series I've been focused on for my main pen name, with two more books already written but in need of editing and revision. While entrenched in those re-writes and edits, I'm hoping to use my latent creative energy to finish the last five episodes of Rapturous Dawn to put out later this year. In the meantime, I'm going to be popping in here more often. I kind of miss this place :)

I no longer keep my two pen names distinctly separate, so if you're interested in my other work or reading my posts and updates over the past few years that I've been gone, you can find my other Author Blog at www.everynkildare.com or look me up as @EverynKildare on most social media.
I promise, I don't bite.

In other news, I'm feeling so disastrously horrid about abandoning this guilty pleasure project, that I'm going to give away FREE copies of Episode One on Amazon for the next five days starting Monday, March 20th - five days being the maximum amount of time they'll let me give it free there since the serial is still enrolled in KDP Select. If you know anyone who might get a kick out of the series, pass it along! I'll post again when Episode One goes free tomorrow morning <3 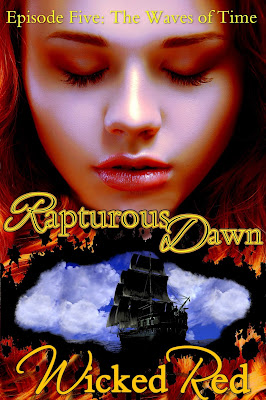 Rapturous Dawn ~ Episode Five: The Waves of Time is now available on Amazon!


And remember, reviews and word of mouth are an author's best friend - if you are enjoying the serial, please consider telling others about it and leaving a review.

Thank you to everyone who expressed well wishes over the past two weeks. I am feeling much better, though not fully recuperated quite yet.
However, I can't bring myself to make you wait any longer, so at this very moment I'm doing one last read-through of Episode Five (don't tell my hubby, as I haven't actually gotten the green light to go back to work yet heehee) and then I'll be uploading it to Amazon so it should be available at some point today!

I'll update again when it officially goes LIVE with a purchase link once it's up.

Again, I apologize for the delay. I hope you enjoy the next installment of the serial and it's just a matter of "good things are worth the wait" :D
No comments:

Due to an unexpected medical emergency I have not been able to release Episode Five as anticipated. I have been placed on bed-rest with the possibility of spending the weekend in the hospital (hopefully just the former and not the latter *sigh*)

I feel horrible about this, and apologize profusely to anyone who was looking forward to getting Episode Five today. I promise to get it out to you as soon as I am physically able.

I'll update you as soon as I have been cleared to get back to work :(
No comments:

Just a few more days until Episode Five is released. I'm sooooo excited!!!! You'd think by now it would have lost its luster - but no, every time is like the first time. :D

Today's teaser is a snippet of conversation between Cinnamon and the Captain of the pirate ship who has taken her and the entire crew of the Rapturous Dawn prisoner.

Cinnamon leaned forward, trying to keep the rope loose between them. He smiled, satisfied, and then coiled the end around his forearm, pulling her towards him until she could feel his breath on her cheeks.
“If you promise to behave no harm will come to you.” Cinn lifted her eyes, nodding. The Captain pursed his lips skeptically, “You promise not to shift?”
“I don’t know how to shift.” She said steadily, her chin rising higher as she met his gaze.
“Is that so? Interesting.” His lip curled on one side as he coiled the rope around his arm again, giving her so little leeway she was forced to kneel in front of him. With his other hand he pressed his fingers under her chin, lifting her face to peer curiously into her eyes. Cinnamon’s mouth twisted into a sneer of disgust.
“I’m not an evil man.” He said softly, “Just a desperate one. Centuries of torment have made us this way. Time has driven us mad - but we cannot lose our humanity.” Cinnamon made a small sound of doubt and he narrowed his eyes at her. “But what would a creature like you know of humanity?”
Cinnamon pressed her lips into a thin line, exhaling through her nose, “I was raised as a human. I lived among them my whole life. Their capacity for goodness is only equal to their capacity for cruelty.”
“You think I’m cruel?”
Cinnamon didn’t need to answer.

When he didn’t continue, she began to feel brave.
“How did you come to be stuck in this place?” She asked quietly.
“The wrath of fate. Regrets we cannot atone for—”
He stared down at his hands and after a moment twined the length of rope between his fingers, hardening his fist.

That Captain! Sheesh, even I'm not sure if I feel sorry for him, or if I want Cinnamon to gouge his eyes out - and he's a figment of my imagination! Ha!

Episode Five will be available on Amazon this Friday, August 21st. If you'd like to be notified when new episodes are released, please consider joining our newsletter for updates and special promotions:

All right! Time for the "official" cover reveal for Episode Five lol

The Rapturous Dawn is no ordinary vessel. It travels the Waves of Time, ferrying its supernatural crew across every ocean throughout history.

Cinnamon Blake has just stepped aboard its shadowy decks, agreeing to apprentice with the ship’s sole passenger - the mysterious Lady Night. Cinn is willing to accept both pleasure and pain to master the secrets of her new world and find her place within it.

Episode Five:
The Rapturous Dawn has been trapped in the Waves of Time for months - supplies are running low and the crew is growing restless. As Lady Night and Captain Sheridan struggle to quell the growing hostility and suspicion, a mysterious ship appears in the Waves - sporting black sails the notorious Jolly Roger. The Rapturous Dawn is quickly overtaken, and Cinn finds there is nothing quite so frightening as a ship full of pirates who’ve been cursed by the Lord of Time.

But pirates aren’t the only surprise in store for Cinnamon. People she has grown to love and trust reveal their true faces and things on the Rapturous Dawn are about to get a whole lot more complicated.


The Waves of Time is the fifth episode in the Rapturous Dawn Serial.

Rapturous Dawn is a work of serialized fiction - short, individual vignettes with an over-arcing storyline. You can read the installments like separate stories or follow them in order like episodes of a television series.

***Due to explicit sexual content, language and violence, this series is recommended for ages 18+***

Whoooo! Episode Five. We're half way through Season One :)
On with the teaser!

Leilani tapped her apprentice on the forehead to draw her attention and Cinnamon blinked up at her in surprise, “This exercise, on the other hand, is all about control - or your lack of it. You might as well practice while we have the opportunity.”
Cinnamon heaved a sigh, dropping down onto her haunches before plopping her butt down onto the deck.
“I’m hopeless. You make it look so easy.”
Leilani gave her a sympathetic smile, “I’ve had all of Time to practice. It’s part of who you are. You’ll figure it out eventually.”
All of Time…
Cinn wondered sometimes just how long her Mistress had been riding the Waves of Time. Countless centuries - forward and back - into infinity. The prospect was both exhilarating and daunting. It was as if the Rapturous Dawn existed out of time entirely, and the ship and its passengers only existed in the time-line of the world for the brief intervals when they docked with dry land.

As I stated last week, Episode Five delves deeper into the backstory of the Rapturous Dawn and its crew. Secrets are revealed that change everything. Oh, and there's pirates. Yay!

In other news, Episode Three: The Playwright is FREE today on Amazon, so if you haven't read it yet hop on over and get a copy. :)

*Re-reads her post title*
Either I'm still half asleep, or that title sounds like the cover is doing a strip-tease lol!
Yeah, maybe I'm still too sleepy...

*Comes back an hour later after consuming a substantial amount of coffee.*

While working on the cover for Episode Five, I decided to make some changes to the previous four episodes. I think the revised covers look pretty good, though I still may make some more changes in the future *shakes fist at Episode Three*. 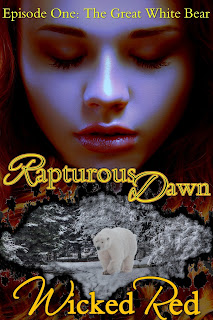 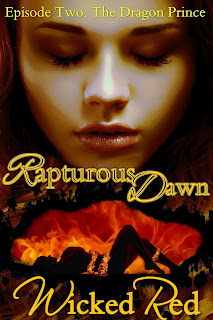 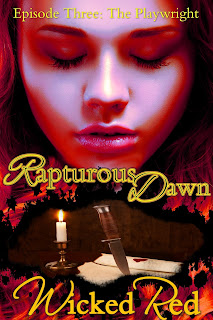 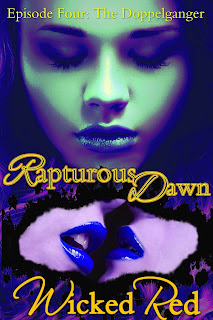 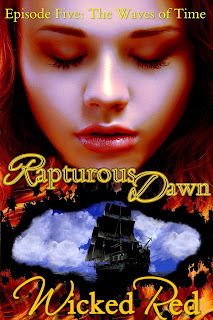 Oh, what's this? The cover for Episode Five?

Yep, what do you think?
I think, so far, the cover for Episode Five is probably my favorite - but then again, it's a special episode. It delves deeper into the back-story of the Rapturous Dawn and its crew - and there's pirates. Who doesn't love some dangerous, morally corrupt pirates to shake things up?

Well, today was just a peek. I'll be doing a proper cover reveal with blurb next week on the Friday Fix - and teasers for Episode Five start next week, so stick around.

Thanks for reading :D
No comments: